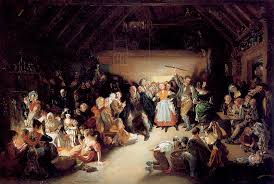 Irish New Years Eve traditions in Ireland long ago were important in that they determined the luck of the house for the coming Year and many traditional Irish superstitions existed around this day .

Anything that happened on this day was considered ominous for the future and the nearer to the midnight hour when the year actually began, the more significant. It was believed that there was only a certain amount of luck in the world and you had to do everything you could to make sure you got your share of it!

In Ireland long ago it was important to begin the New Year with a spotlessly clean house signifying a fresh start to the New Year.

A popular new years eve traditional Irish belief was that the first person to enter the house after midnight should be black haired and also male to guarantee the luck of the house for the coming year. If it was anyone with red hair it would bring hardship and grief ! To prevent this, families sometimes sent out a dark haired member of the family immediately after midnight and had them walk back in though the door. All dark haired neighbourhood boys would visit the houses and be welcomed with gifts of sweets or money.

Also known as ‘the night of the big portion’ since people would eat a larger than normal meal to ensure food in plenty for the coming year . Another way of ensuring plenty was to make a cake which was then pounded against the door of the house three times while a prayer was said by the housewife . This would chase the bad luck out of the house and invite the good spirits in. In other areas the man of the house would take three bites out of the cake and then throw it against the front door, in the name of the Trinity and banish hunger from the house. After this the family would then gather up the fragments of the cake and eat it.

Many farmers repeated this ceremony at the door of the byre to ensure plentiful fodder for the cows.

People tried to ensure that no food was taken away from the house on new years eve and beggars knew better than to approach a house looking for food.

Another New Years Eve Irish tradition was that young girls put mistletoe under their pillows on New Year’s Eve, in hopes of dreaming about their future husband.

On New Year’s Eve night, families would remember those who has passed away that year before by setting a place for them at the dinner table and leaving the door unlatched.

Anyone entering the house after midnight by the front door would leave by the back door for good luck.

Well into the evening on New Year eve in Ireland there would always be a small group gathered around the fireplace, laughing and joking. Sooner or later, the conversation would turn to reminiscing about Ireland. The old ones, well on their way with a few glasses of the hard stuff, would get all misty-eyed as they remembered times past and the stories would begin in the light of just the fire and candles burning in the windowsill.

If you are ever in Ireland and interested in finding out more about Irish life in times past and our wonderfully rich culture of folklore and storytelling we would be delighted to welcome you to our ‘Evening of Food , Folklore and Fairies’ . The evening takes place in an intimate candlelit setting in O’Sheas Traditional Irish Pub.