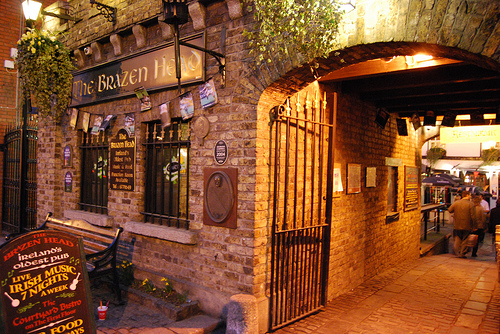 History of the Brazen Head Dublin

The Brazen Head is Dublin’s oldest pub. In fact there has been a hostelry here since 1198. The present building was built in 1754 as a coaching inn. The history of the Brazen Head Dublin is fascinating- continue reading on!

Location of the Brazen Head

The Brazen Head is located on Bridge Street. This is the area from where the original settlement that was to become Dublin got its name. The Irish name for Dublin is Baile Átha Cliath – (pronounced: Ball-ya-Awha-Clia) which means “The Town of the Ford of the Reed Hurdles”. Beside the pub the Father Matthew Bridge crosses the river. It was at this very spot that the original crossing of the river was located. Here reed matting was positioned on the river bed which enabled travellers to cross safely at low tide.

It is easy to see therefore why an inn close to the bridge was always a good idea to refresh travellers who had travelled a long distance. In the days when people travelled by coach the Brazen Head was a coaching inn and hotel. Here teams of horses could be changed while the weary travellers refreshed themselves with the excellent food and drink for which the Brazen Head has always been famous. 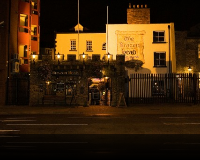 What’s in a name!

The name ‘Brazen Head’ relates to a 13th century legend of a bronze or brass head mounted on marble that could predict the future. The head reputedly would answer any question put to it. The only problem was that the head could only answer with “Yes” or “No”, so questions put to it had to be very carefully phrased!

It was here that the United Irishmen planned their insurrection and Robert Emmet used the pub to plan the rising of 1803. Emmet stayed at the premises in a room overlooking the main door so he could see possible enemies approach. His rebellion failed and he was hanged in nearby Thomas Street. Ironically the Hangman used to also drink in The Brazen Head.

It was from the corner outside the Brazen Head overlooking the river Liffey that in the early hours of 28 June 1922 Free State troops using heavy artillery opened fire on Anti-Treaty forces holding the Four Courts across the river. This ignited the Civil war which lasted for a year and deeply divided the country. The Four Courts were consumed by flames and many historical documents were destroyed.

Inside the pub, displayed on the walls, there is a unique collection of photographs dating from this turbulent period. In fact there is a wonderful sense of history throughout the Brazen Head which has to be experienced to be fully appreciated.

There are also strong literary connections with the Brazen Head, in particular playwright Brendan Behan and the world famous author James Joyce. In fact Joyce referred to the Brazen Head in his classical work ‘Ulysses’ when he wrote “…you got a decent enough do in the Brazen Head for a bob.”

The Brazen Head today is popular with locals and tourists alike because it has managed to retain the true ‘old’ pub atmosphere as well as being one of Dublin’s premier food and drink emporiums. The ‘craic’ is always mighty with live music every night of the week. Without doubt one of the best pints of stout can be had here as the pub is located within walking distance of the world famous Guinness brewery just up the road at St.James’ Gate.

The Brazen Head is more than a great pub with great food. It is an experience that is a must for anyone visiting Dublin. The combination of history, atmosphere, craic, traditional music, food and drink combine to create an atmosphere when there are no strangers just friends old and new getting together to swap their own tales of adventure and excitement. 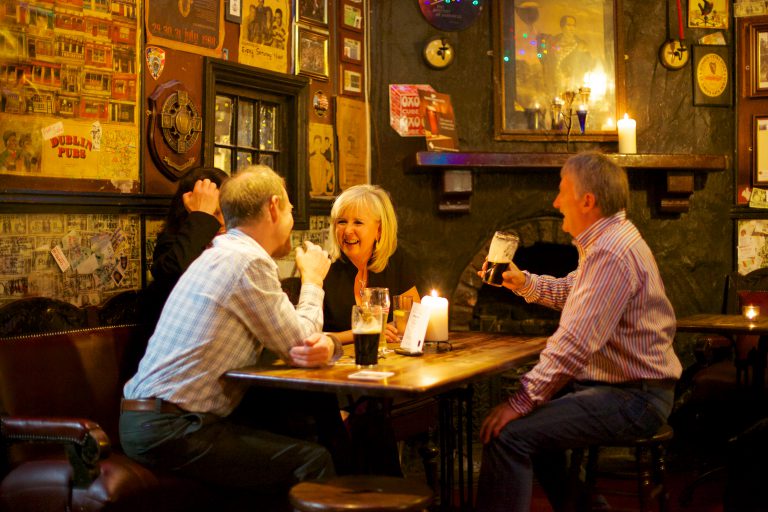