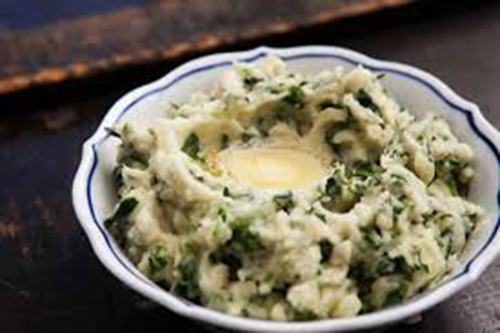 Please enjoy this selection of history and recipes for some delicious Traditional Irish foods. 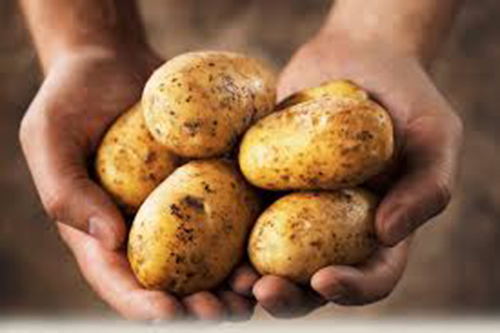 At the beginning of the 19th Century the potato was the main source of food for Irish people, particularly the poorer farmers in the west and South west.

It was bought over to Ireland from south America either by sir Walter Raleigh in 16th Century or the Spanish armada and where in Europe it was seen as a novelty vegetable , in Ireland it was seen as something quite different .

The potato grew well in poor soil and in the cool damp conditions of Irelands weather and was a new means of easily supporting a large family in a small plot of land . One acre of potatoes could support a family of 6 for a whole year and yielded twice as many calories as a field of oats or corn. It was a perfect substitute to the cereal crops people had previously lived on and less labour intensive. It also tasted a lot better ! A change in diet which often takes a long time in any society occurred Ireland very rapidly.

There was no need for many cooking implements. All you needed was an iron pot filled with water on your fire and once potatoes were cooked they were strained into a round shallow wicker basket called a skib. The family could sit around on the floor together and share from the one skib. It meant a minimum need for furniture and cooking implements which was ideal for a poor people.

The potato is very nutritious and when drunk with buttermilk which was main drink for people at the time you had a balanced diet of protein, fat, carbohydrate and minerals. Although the Irish were the poorest people in Europe on this diet we were the healthiest, tallest people in Europe!

Labourers would eat up to 14lb of potatoes a day and an average adult consumed 10lbs of potatoes a day. With all that starch expanding in our stomachs we were said to have the largest stomachs in Europe on this diet.

When this is your sole source of food you had to be imaginative with it. People ate potato cakes, potato bread, potato pancakes ‘the boxty’. Colcannon was also a favourite. A large pot of potatoes was boiled and then the man of the house pounded the potatoes with a heavy wooden pounder known as ‘a beetle’ while wife added milk and cabbage or kale (wild cabbage). Everyone got plate and then made a hole in centre into which was put butter.

Colcannon was often eaten on special feast days and used in divination games played on Halloween night. A ring and sowing thimble were placed in the colcannon and girls would sit around the pot and eat at the same time.The first girl to get the wedding ring would be married. The one who got the sowing thimble meant spinsterhood or emigration!

Did you ever eat colcannon
When t’was made with yellow cream
And the kale and praities blended
Like a picture in a dream
Did you ever scoop a hole on top
To hold the melting lake
Of the clover flavoured butter
Which your mother used to make.
Yummy dish and here is the recipe

1 med. head of cabbage – OR – equivalent amount of kale
2 lbs. Potatoes
2 medium leeks
1 cup Milk
mace, ground black pepper
1/2 cup butter or margarine
1. Quarter and core the cabbage.
2. Cover the cabbage with water and boil until tender (about 12-15 minutes). Chop the cabbage when cool enough to handle.
3. Clean and chop the leeks.
4. Cover the leeks with the milk, heat until almost boiling, then simmer until the leeks are tender. Set aside.
5. Peel the potatoes and boil until tender.
6. Mash or rice the potatoes. Stir in the leeks and milk, adding a bit more milk if need to have a smooth consistency.
7. Add a small amount of mace and ground pepper, to taste.
8. Mix in the cabbage and butter. 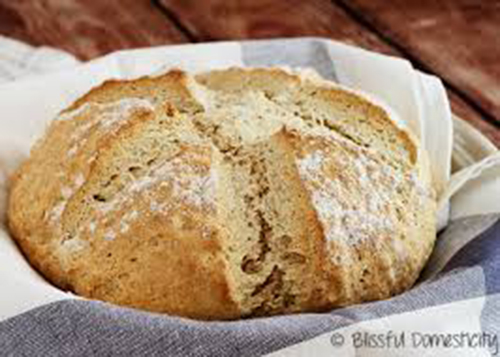 Wheat and oats were the most common grains used for bread making in Ireland in times past.

Oat bread was most common in the West and North West of the country and was a flat bread baked on a flat iron plate known as a griddle which was placed on a stand just 4 inches above the embers. the bread was then turned over to cook on the other side. It was left to cool on a stand next to the fire and was then eaten hot with melting butter.

Although oat bread lasted longer it was not as tasty as bread made from wheat . Wheat bread was made in the warmer wheat growing areas of the South and East of the county.

Wheaten Bread was originally leavened with yeast , or sour dough but in the latter half of the 19th C the introduction of chemical leaven in the form of bread soda (sodium bicarbonate) allowed the bread to rise much better and it then became known as ‘ soda bread ‘. This in conjunction with buttermilk, and the unique flavour of Irish meal gives it its special flavour.

Traditionally soda bread was not “baked” in an oven but rather in a pot, known as a bastable, which was placed over the fire in the hearth .The pot oven was a great baking utensil . It was a deep flat bottomed pan with a closely fitting lid on which glowing embers were piled to ensure even heating gave perfect results for baking. In poorer homes with no bastable pots they just wrapped the bread in cabbage leaves and covered it in embers.

Soda bread was the high point of Irish bread making and was regarded as one of the finest bread types in the world.

Traditional skills of bread making were passed on from mother to daughter and were a great source of pride. It was a compliment of the highest order if a woman was described as having a light hand for baking.

4 cups Flour
1 tsp. baking soda (bicarbonate of soda)
1 tsp. Salt
1 tsp. Sugar
2 cups Buttermilk
1. Preheat the oven to 425 degrees F.
2. Sift the dry ingredients into a bowl.
3. Stir the buttermilk into the dry ingredients to form a soft dough.
4. Knead the dough lightly on a floured board. (Don’t knead too much or the final product will be tough!)
5. Shape the dough into a round loaf no more than 8 inches in diameter on a baking sheet.
6. With a floured knife, cut a cross in the top of the loaf.
7. Bake the loaf until it sounds hollow when tapped, about 30-40 minutes. 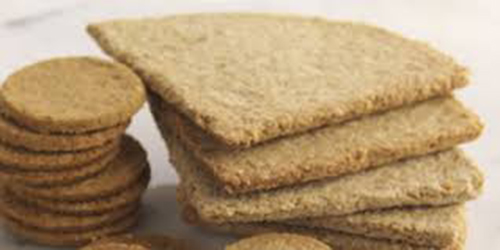 Oats thrive in Ireland especially in poor soil of the north west and since medieval times formed an important part of the Irish diet. Porridge, gruel and stirabout were common.

Oatcakes were very popular and consisted of oats ground down to a meal using rotary hand quern. They were mixed with water and butter to form a thinly rolled dough then cooked on a flat iron plate known as a griddle after which they hardened on a stand in front of fire.

1 cup Oatmeal
1/2 cup Flour
1/2 tsp. baking soda
1/4 tsp. cream of tartar
1/2 tsp. salt granulated sugar
1/4 cup butter (or margarine)
1/4 cup hot water
small amount saltoatmeal, for working with the dough
small amount saltflour, for working with the dough
1. Preheat oven to 350 degrees F.
2. Put the oatmeal into a large bowl.
3. Sift the remaining dry ingredients into the bowl with the oatmeal.
4. Bring the water and butter (or margarine) to boil in a small saucepan.
5. Add the hot liquid to the dry ingredients and mix them in.
6. Dust your working surface with a small amount of oatmeal.
7. Turn the dough onto the dusted surface and roll into a circle about 9 inches across and about 1/8 inch thick.
8. Dust with oatmeal and press the grains into the surface slightly.
9. Cut into 8 triangles. (Alternatively, the dough can be cut into smaller circles using a jar lid or cookie cutter.)
10. Dust a baking sheet with flour.
11. Place the triangles or circles on the baking sheet and bake for about 40 minutes.